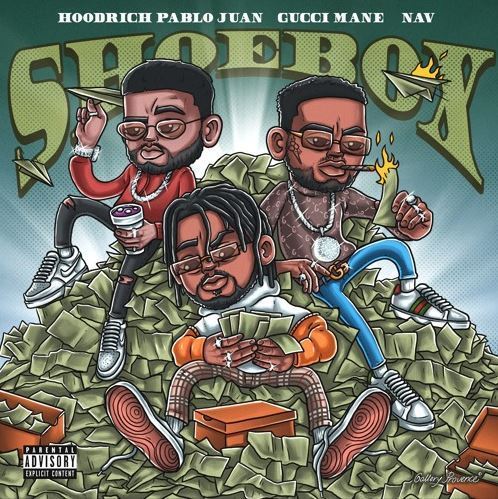 The new song “Shoebox” by Pablo Juan was coming barely a week after the release of screaming Slatt which features the YSL record frontier rapper Young Thug.

Hoodrich Pablo Juan teams up with Gucci Mane and Nav for his latest record, “Shoebox.” The three rappers connect on a bass-heavy trap beat that kicks off with Hoodrich Pablo Juan’s gravely voice on the hook. Hoodrich and Gucci Mane hold down hook duties on the track before Nav comes through on the first verse.

The beat employs a creeping piano and teeth-rattling bass, and sounds similar to several other trap bangers. Hoodrich Pablo Juan dropped his last album “Hoodwolf 2” in July, 2018. That has trigger him to be featured by several top artists like Sauce Walka, BlocBoy JB , G Herbo , A$AP Ant and more. He recently features in Z Money’s latest track “Millions” alongside Gucci Mane.

The new track “Shoebox” is probably from his soon to be released album called “Blo” which is due for release by next week.

Listen to Shoebox by Hoodrich Pablo Juan featuring Gucci Mane and Nav below and share!