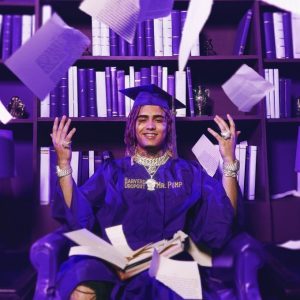 The extremely talented American rapper, singer-songwriter, Gazzy Garcia, known by his stage name as Lil Pump drops off a dope collaboration with Lil Wayne which he titles Be Like Me.

The new song features the American hot rapper “Lil Wayne “. The new collaboration with Lil Wayne is part of tracks that is off “Lil Pump‘s upcoming project Haverd Dropout, which is set to be drop on this Friday on the 22nd after months of it being delayed.

The Gucci Gang rapper Pump shared a video late last year, apologizing for a preview of his upcoming “Butterfly Doors” song he posted on his Instagram early this month.

Lil Pump is best known for his 2017 song “Gucci Gang”, which peaked at number three on the U.S. Billboard Hot 100. The single that certified triple platinum by the Recording Industry Association of America.