#stingymenassociation is becoming a trend on Twitter as Don Jazzy joins the “Stingy Men Association” of Nigerian, SMAN. 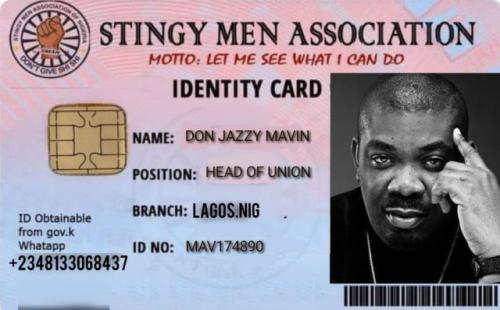 On the identity card which he posted, the motto of the organisation reads “Let Me See What I Can Do”

Before #stingymenassociation became a trend on social media, a zambian man was reportedly arrested for assault after he beat up his wife when she asked money to make her hair.

Mrs Mweembe “the wife to the suspect” asked her husband money for her hair a week ago but the husband kept replying he is now a member of SMAZ and can’t afford to give her a K150 but rather a K10. It started like a joke explained the injured wife who was later rushed to Ndola Teaching Hospital..