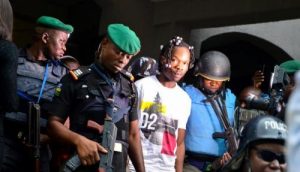 Here are eight things we thought fans should note from the Naira Marley conversation with the Nigeria police about the end SARS protest.

The Nigerian Controversial singer, Naira Marley in a question and answer session with the Nigerian police force has voiced many Nigerians frustrations regarding the brutality of the police including the extrajudicial killings by the special anti-robbery squad.

In over thirty minutes of live interaction with the Nigeria Police Force on Instagram, these are some notable points noted during the question and answer session.

1. The Nigeria Police would remove all SARS operatives off the Nigerian roads. it will be recalled the inspector general of the force banned the group from engaging in stop and search activities on Sunday.

2. All police officers must be on their official uniforms or approved tactical outfit. The Police PRO reiterated its abnormal for a police officer to go on patrol in mufti. He said any police officer that falter will be penalized.

SEE:  My "Ukwu" Is My Selling Point - Actress Pat Ugwu

3. it is legal to record a police officer for evidence’s sake but you must apply sense and be wise. However, in a security- conscious zone, it’s forbidden to take pictures.

4. police operatives will now move in a licensed Police vehicle and not danfo buses or Keke Maruwa or Ibadan Micra. Any police officer that does that will be seriously penalized.

6. More so, The police have opined they would be willing to partner with the youths to ensure effective policing, furthermore more they would be recruiting 10, 000 youths at the nearest possible time.

SEE:  "We Are Not Supporting That Boy, He’s A Fraudster on his own" - Ruggedman Comes Hard for Naira Marley

7. Also, the police are planning to have a camera attached to each police officers uniform

8. finally, he said, you do not change the system by staying far from the system, Nigerians to support the police and monitor the policing of the body.