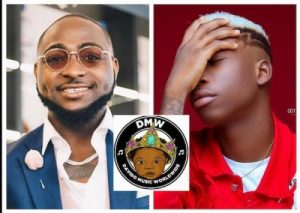 Nigerian singer, Davido has made it known to the general public that his signee, Lil Frosh will not suffer as long as he is alive.

The DMW boss, Davido has taken to social media to always be there for the recently fired Lil frosh who was alleged to have beaten his ex-girlfriend to a pulp.

Davido revealed this after a Nigerian upcoming artist, Oladips begs on his behalf via a short freestyle rap appealing to Davido to forgive the former DMW music artist. 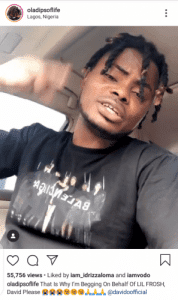 Oladips further revealed he had a conversation with Lil Frosh , he opined, the youngster is already in regret.

The short freestyling getting to Davido’s attention has reacted to freestyle rap saying he has no forgiveness to do as he is not the one that was beaten to a pulp by Lil Frosh.

However, he stated that, in as much he lives, Lil Frosh will never suffer.

Watch a short freestyle video of Oladips pleading for him below!