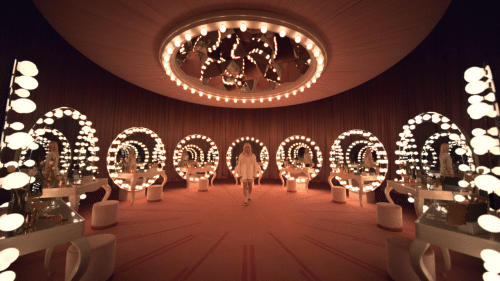 Billie Eilish has collaborated with Apple Music on the creation of a film that captures the unique immersive experience of listening to her new album with Apple Music’s new audio technology.

Billie Eilish – Happier Than Ever in Spatial Audio on Apple Music

“I’m getting older. I think I’m aging well…” – The opening words of Billie’s second album usher us into the world of the beautifully directed piece, released today (August 11).

Sung a cappella by a solitary Billie seated in front of a vanity mirror that reminds us of a different era of singers, the mood is instantly set and the themes involved are made clear: Growth and self reflection. This is a new era of Billie.

The film created by Apple Music in close collaboration with Billie Eilish mashes up two of the new songs from ‘Happier Than Ever’: Getting Older and GOLDWING.

As the song transitions, we see the young artist’s reflection start to multiply in a series of mirrors, surrounding her.

These stunning moments in which Billie seems all around us are metaphors meant to represent what it’s like to listen to ‘Happier Than Ever’ in Spatial Audio, a new audio technology recently rolled out by Apple Music for all of its subscribers.

Powered by Dolby Atmos, Spatial Audio on Apple Music takes the listening experience of the new album to new heights, bringing incredible details and dimensionality to Billie’s vocal performance and the masterful production of her brother and collaborator Finneas.

The film will be rolled out on Billie Eilish and Apple Music’s social media channels on today.