Binta Diallo, Wizkid 2nd Baby Mama Reveals They Are back Together

Binta Diallo, who happens to be the second baby mama of the popular Nigerian Afrobeats singer, Wizkid has disclosed she is back with Wizkid, they both have ironed out their differences and settled their long time rift.

Binta Diallo revealed this during a question and answer session with fans who enquire about the situation between her and her ex and father to her baby.

she reacted to the question asked disclosing that, they have ironed out their rift. It will be recalled this rift has been on for years.

She further qualifies Wizkid to be the King of African Music. Meanwhile, over the weekend, Wizkid joined the Nigerians’ youths to stage a protest in the United Kingdom to lend their voice over the extrajudicial killings and extortions by the Special Antiropbbery squad popularly known as SARS. 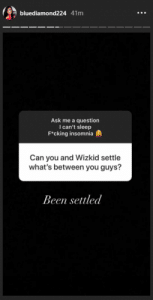 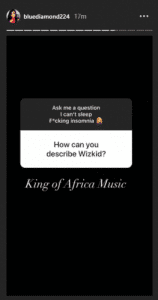 it would be recalled, Nigerians have hit the street to voice out their displeasure over the inhumane extreme acts of the police.