Burna Boy‘s Ex, Jo Pearl has reacted to viral video of Davido and Mya Yafai hanging out together.

In the video, Davido was seen holding hands with the lady as they stepped out.

READ ALSO:  Lady narrates what she did to her boyfriend after she caught him with his “bestie”

Since the video made it to the Internet, Nigerian has been wilding out. For some, they expressed concern about his relationship with Chioma.

Jo Pearl who raised alarm of her perceived treatment from Burna Boy, also shared her comment.

one day, we will all learnto leave Nigerian men alone. 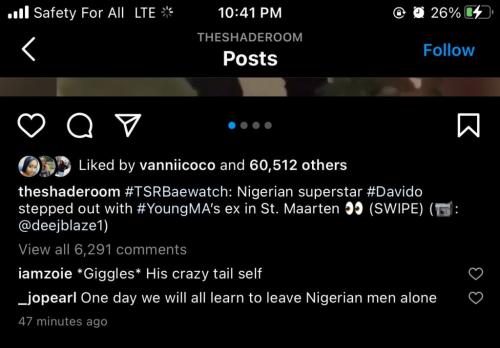 Davido proposed to his fiancee Chioma in 2019 and they welcomed a son that same year.