Davido Confirms Being The Drake Of Nigeria 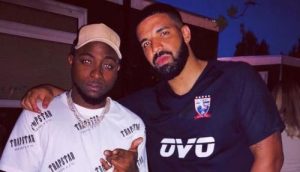 DMW Superstar singer, David Adeleke Also known as Davido has taken to compare himself with the popular American singer Drake.

This was revealed by the artist when he corrected one of his fans saying;

The DMW reacting to the tweet, quoted the tweet change the perspective, he said, Drake is the American version of him negating what the fan initially meant.

See the conversation below!

Davido, who recently released the song “FEM” after having three months’ leave from the social media platform.

The track remained on top of all streaming platforms for more than three weeks now.

Davido hinted his album would be released very soon before the year runs out. furthermore, Davido in a detailed interview with Ebuka has revealed a bit more about how he got into Nigeria music.

he reveals the struggles he had to go through before his dad allowed him to do music. He further revealed how Burna boy used to be his brother and how they got flogged by soldiers for putting on a camo.

Pop Smoke - Tsunami Ft. Davido
Angel - Blessings (Remix) Ft. French Montana, Davido
Davido Suppose To Be In Jail if Not For Democracy? - Do You Agree
Drake Says "Fever" By Wizkid Is His Favourite Tune