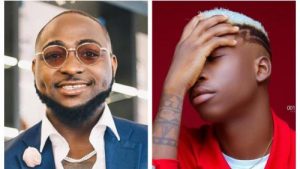 The upcoming artiste, Lil Frosh was on a joint record deal with AMW and DMW.

An associate of Davido who pleads anonymity disclosed that Lil Frosh ’s decision was due to the fall out between Aloma and Davido Lil frosh on his side claimed the reason he left Aloma record label is due to the irreconcilable issues and therefore chose what is best for his career.

“DUE TO RECENT DEVELOPMENT, I SANNI GORIOLA (LIL FROSH) WILL LIKE TO ANNOUNCE TO THE GENERAL PUBLIC THE TERMINATION OF MY CONTRACT WITH ALOMA MUSIC WORLDWIDE DUE TO IRRECONCILABLE DIFFERENCES. “THIS IS TO SERVE AS COMPLIANCE TO ALL PARTIES INVOLVED. THE TERMINATION IS EFFECTIVE FROM TODAY. I AM NOW OFFICIALLY SIGNED TO DAVIDO MUSIC WORLDWIDE(DMW). GENERAL PUBLIC PLEASE TAKE NOTE,”

Lil Frosh said in a statement.

It will be recalled Davido fired Idris Aloma in August 2020. The announcement was made known by Davido’s Logistic Manager, Israel DMW on August 15th.

The logistics manager, further reveals his replacement and warned people to not do business with Aloma regarding Davido anymore.

“ALOMA, HIS NO LONGER MY OGA’S PERSONAL ASSISTANT OR IN DMW. WHO SO EVER DOES ANYTHING WITH HIM, DOES IT AT HIS OWN OR HER RISK. BADDEST PA NOW HIS @SANTUSGEE. BE WARNED”.

However, Aloma later dropped a message for everyone wondering what could have led to his dismissal.

“EVEN JESUS CHRIST GETS ENEMY. JUST BE REAL AND BE GOOD AND IT WILL SET YOU FREE. JEALOUSLY AND HATRED DON DEY TEY TEY. ALOMA MAN OF THE PEOPLE ALWAYS STANDS ON TRUTH. BLUNT.”