My Wife Agreed To Have SEX With A Stranger As They Go On A Date, She Doesn’t Know It’s Me

A heartbroken man is on the verge of meeting his cheating wife after he created a fake Facebook account to test her loyalty to their marriage.

This man connected with his wife with a profile which had someone’s name and picture.

He talked her out with a lot of vibes and finally sneaked into her pants.

The man’s wife agreed to hook up with him as they meet on a date.

My wife met someone on Facebook, their thing is going on for almost 4weeks now. The guy is unemployed, as soon as I leave for work they start chatting, she sends him airtime and money.

Last week she told me about her sick aunt and she needed money to send to her, it was a lie, she sent R500 to her guy. She told the guy that she is happy with me and she is doing this just for fun.

They spoke about sex and they agreed to do it on their first date, the guy told my wife not to have sex with me for at least one week before the day because he wants her fresh.

From last week she is telling me that she is not ok to sleep with me.

They will meet on Thursday and she doesn’t know that I am the new guy with a fake account! 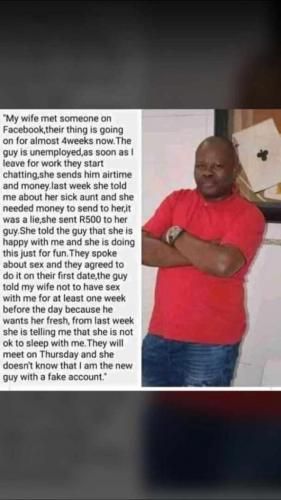