Home » Entertainment » Nigerian man calls out his ex on her birthday, accuses her of cheating on him

Nigerian man calls out his ex on her birthday, accuses her of cheating on him

A Nigerian man, Uzor Bobby is being bashed online by angry Nigerians over his post accusing his former girlfriend of cheating on him with married men.

Uzor took to Facebook on Sunday afternoon December 13, to celebrate his ex on her birthday and prayed God blesses her with a better man that she won’t cheat on with married men because of excess love for money.

Happy birthday to my ex. May the good Lord bless and give you a man better than me if you won’t cheat on him with married men because of excess money.  It mustn’t end in marriage.  #NoBadEnergy 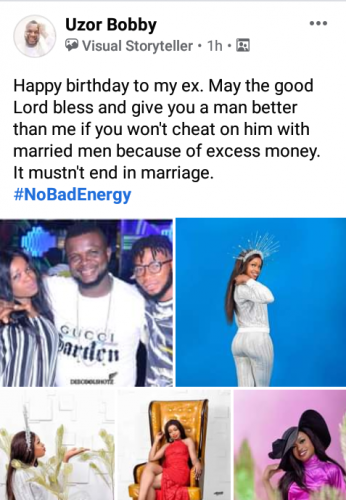 In a heated exchange with a lady who insinuated that his ex probably cheated on him because he couldn’t take care of her or marry her, Uzor claimed that he had gone to meet her parents few days ago only to find out that she was in an Owerri hotel with another man.

December I was in their home town to meet her parents, when she was called it happened that she was in a hotel in Owerri with a guy from Russia. Bro, she later called and begged and I forgave her, yet she kept doing it. I have like 23 guys with her, I have my evidence.” he said.

He also claimed to have lived and visited many countries including China, Dubai, among others and threatened to block the lady for implying that he is incapable of taking care of a woman.

I lived in California. Was in Israel last year for pilgrimage. I have been to China for six times, Canada and Dubai. I am the CEO of Beliuzment Reliable Solace Ltd. I don’t like your reasoning.

BBNaija: Ex Housemate Kaisha Spotted at Shiloh 2020, Accused Of Looking for A Husband!!!

Odunsi Olawale J. is a graduate from the University of Lagos (Unilag), studied Geography and Planning.

BBNaija: Ex Housemate Kaisha Spotted at Shiloh 2020, Accused Of Looking for A Husband!!!