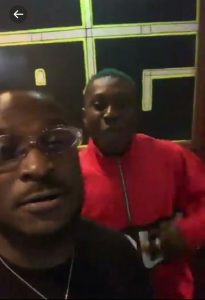 The DMW signed pop sensational singer and songwriter Tobechukwu Victor Okoh professionally known as Peruzzi is about to take his fans to that Zanku level as he teams up with the one and only Zanku boss Zlatan on his upcoming song which title should probably be “Bayi Bayi“.

Peruzzi announce the new single on his twitter page as he share the snippet of him and Zlatan vibing to the track. with the caption: “KAPACHIMARIMARICHIPACO x BE
THE BANG BANG”

Let’s keep our fingers crossed as we anticipate this dope jam.