Home » Entertainment » Vote Who You Believe In, Stop Influencing Others – Ruggedman

Vote Who You Believe In, Stop Influencing Others – Ruggedman 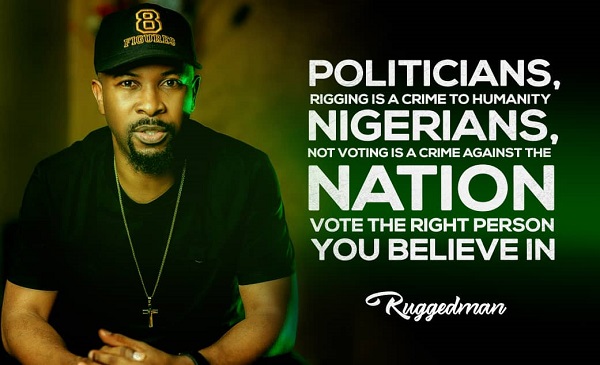 Ruggedman has urges fellow Nigerians to stop influencing others on who to vote, advicing they should vote who ever they believe in.

The Sucasa Micasa with Mr Real singer Ruggedman, started his music career in the 90’s, which he wrote and produced his songs under his own Record Label, Rugged Records that was home to artiste such as M.bryo.

Rugged Man took to his Twitter account: @ruggedybaba to urge Nigerians to support and promote there candidates, however they want by not bullying others into doing it their way.

Furthermore he urges Nigerians to vote, because it is our civic responsibility and we shouldn’t be dependent on who celebrities are supporting or voting for.

Theres no need trying to tell a full grown man or woman what to say. Who others vote for is their business. Whether they support publicly or privately is there business. Support n promote your candidate however u want, dont try to bully others into doing it your way. https://t.co/EJlE5QYALD — Ruggedybaba Ruggedman (@RuggedyBaba) February 20, 2019

Vote who you believe in. People ask that others not be influenced by celebrities hyping a candidate. Some ask “tell us who u r voting for”. It is nobody’s business. Do your civic duty ( which includes minding your business) and move on. Nigeria must be great again. Suffer don do — Ruggedybaba Ruggedman (@RuggedyBaba) February 20, 2019