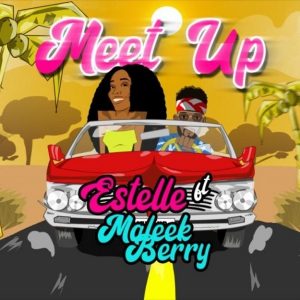 British singer-songwriter rapper and actress from London, England Estelle “Meet Up” with the Sauce of berry’s boom singer Maleek Berry, The track has an urban flair that will fit well in R&B and commercial DJ sets. The lyrics showcase the kinetic energy produced by equal parts attraction and anticipation, the lyrics are as flirty as the groove is infectious. Coming from the latest Estelle album Lover’s Rock, the song was an early stand-out, picked up by the Afro-Beats programmers at Spotify and added to multiple playlists.

Now, weeks later, the song is gaining traction with radio and dance floor programmers from London to Lagos and back to LA, The song was produced by Supa Dups who is known for producing songs for top notch artists such as Sean Paul, Rihanna and more.

The new song comes off the heels of The Estelle Experience tour in which Estelle gave fans intimate performances at high end venues in Montego Bay, New York, Philadelphia, DC, Atlanta and Nashville. Patrons got to experience her live band set as well as hear the story behind “Lovers Rock” from Estelle herself. Inspired by her parents love story, the album “Lovers Rock” was released last September and also features songs “Love Like Ours” featuring Tarrus Riley, “Better”, So Easy” featuring Luke James and “Lights Out”. Estelle Experience West Coast dates will be announced soon.

Listen to Meet Up By Estelle featuring Maleek Berry below and download!