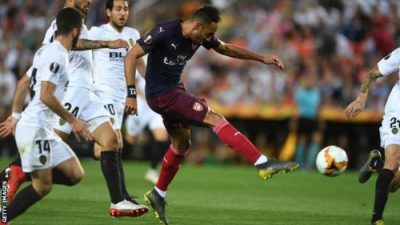 Arsenal thrashed Valencia with 4 goals to two on the Europa League 2019 match.

A Pierre-Emerick Aubameyang hat-trick helped Arsenal into the final of the Europa League as they won in Valencia for a 7-3 aggregate victory.

The Gunners are now just one win away from Champions League qualification , while manager Unai Emery can make history by winning a record fourth Europa League crown.

Trailing 3-1 from the first leg in London, Kevin Gameiro’s close- range effort had given the hosts the early impetus.

Watch and enjoy the highlights below