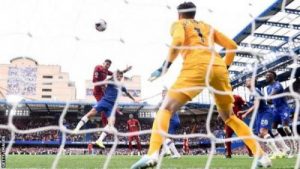 Chelsea got thrashed by Liverpool with 1 goal to 2 on the just finished EPL 2019 match.

Liverpool retained their five-point lead at the top of the table as they became the first team to win their opening six Premier League games in successive seasons with a fiercely-fought victory over Chelsea at Stamford Bridge.

Chelsea, who had been denied an equaliser when Cesar Azpilicueta’s close-range effort was ruled out for offside by VAR, were in no mood to capitulate and made Liverpool fight every inch of the way to maintain that perfect record.

Enjoy the highlights below!