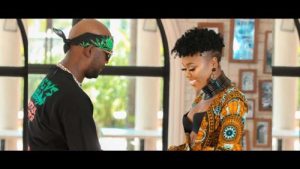 The song was produced by Rash Don of Isbah Record, while the visual is directed by Kwetu Studios.