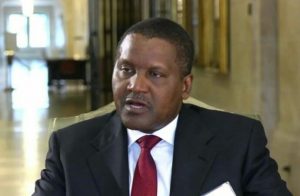 Alhaji Aliko Dangote has significantly moved up in the world billionaires’ list as he emerged 64th richest person in the world, with an estimated worth of $16.6 billion, as against his previous ranking of 103rd in the world.

Dangote, who remains the richest man in Africa for the 8th year running, was the only Nigerian on the list of the top 500 billionaires, as released by Bloomberg in its yearly billionaires list.

The index also revealed that Dangote ’s net worth increased by 23% from $13.5bn on February 26, 2018, to $16.6bn Jeff Bezos remains the richest in the world with $136 billion, while Bill Gates and Warren Buffett followed as second and third respectively with $98.4 billion and $83 billion.

According to the lyrics of Burna Boy new song titled “Dangote” Do You think Dangote still they find money??