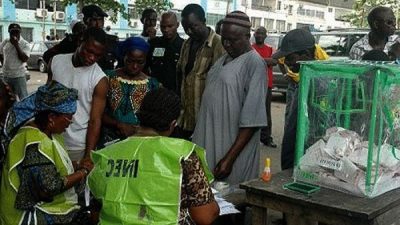 It would be recalled that in 2015, the presidential election was shifted from February 14 to March 28, 2015 while the governorship and Assembly elections scheduled for February 28 were shifted to April 11 because of security issues.

Also, the convoy of Borno State governor, Kashim Shettima, was last week attacked by the Boko Haram splinter group loyal to the Islamic State, West Africa Province, in Gamboru area of the state while the governor was on election campaign.

Speaking with Daily Independent on whether INEC would go ahead with the elections tomorrow despite the security situation in the North-East, Festus Okoye, National Commissioner and Chairman, Information and Voter Education Committee of INEC, said while the election would go ahead as scheduled, it would not risk the lives of its officials and ad-hoc staff by posting them to areas where their safety could not be guaranteed.

“We won’t just move ad-hoc staff arbitrarily to places where we believe they are very vulnerable or places we believe that if we deploy them to, they are likely to come to harm.

“We have been working with the Interagency Consultative Committee on Election Security to map out places that we regard as flashpoints, places that have serious problems of insurgency and places that we have camps of IDPs. “Wherever it is impossible to conduct elections and the security agencies are saying they cannot protect those areas, of course we won’t conduct elections in those areas. “The implication is that it is either the people are completely displaced or partially displaced.

“It is not as if we are oblivious of some of the security challenges but we are working with all of these organs and the resident electoral commissioners in these states that have challenges of insecurity are in touch with all the critical stakeholders in terms of where it is possible to conduct elections and places where it is impossible to conduct elections, or where the registration areas have to be moved or adjusted to make sure that people vote.”