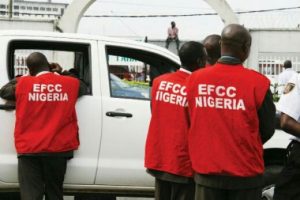 Babadele Abdullahi, the son in-law of the presidential candidate of the Peoples Democratic Party, Atiku Abubakar is currently in the net of the Economic and Financial Crimes Commission ( EFCC ).

Babalele was picked up by the operatives of the anti-graft agency at his home in Maitama, Abuja.

Paul Ibe, the media adviser of Atiku said the arrest was a desperate move to have the former Vice President concede and congratulate Muhammadu Buhari.

The statement reads, “The EFCC agents numbering about two dozen came in 2 regular vehicles, an 18-seater Toyota bus (registration Abuja CS 522 RSH) and a hilux van. They came with a search warrant to search the house and office of Babalele and found nothing incriminating.

He added that Babalele was moved to the EFCC office in Wuse to make a statement alongside Mr. Lawan Ayuba. “It was gathered that the petition relied upon to invade the residence and office of Babalele was authored by a brother of the wife of President Buhari.

As a law abiding citizen, Atiku Abubakar recognizes the constitutional role of the EFCC and indeed any other agency of the government to carry out investigations, but will not be cowed by any attempt to blackmail him into mortgaging his mandate,” he said.

“I Don’t Really Think Marriage Is For Me” – Jaywon