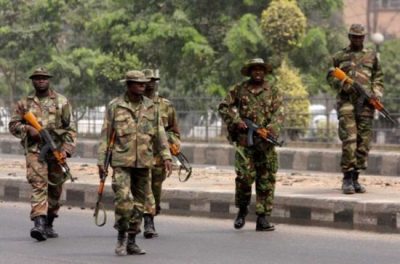 In the Numan Local Government Area of Adamawa State, some soldiers in Yola have reportedly killed three persons celebrating the electoral victory of President Muhammadu Buhari on Wednesday.

The youth, who woke up to news of the re- election of Buhari for another term, poured out into the streets of major towns in the state. However, it is the celebration in the Numan town that went bloody. This followed an altercation between jubilant Buhari supporters with armed military men stationed near Numan Bridge.

It was gathered that the jubilant youths initially on a peaceful victory procession later became uncontrollable and disorderly as some of them attacked the military personnel who tried to tame their celebration.

The soldiers had allegedly fired warning shots into the air to warn the crowd which started advancing towards them while hurling stones. The soldiers were said to have fired shots again, which allegedly hit some persons.

Three persons were reportedly hit, while their corpses were later deposited by the soldiers in the mortuary of Numan General Hospital.

In another part of the state around Jippu Jam roundabout in Yola, some young people who joined in celebrating Buhari’s victory at the polls also reportedly put up a mock ‘coffin’ of Atiku, suggesting his defeat at the polls. The police in Yola said they were aware of the clash between the soldiers and youths in the Numan area.

The state Police Public Relations Officer, Othman Abubakar, added that the command had, however, yet to get any report. He said:

“There are many reports; but policemen on the ground told us that there were persons that were injured; I cannot confirm any death.”