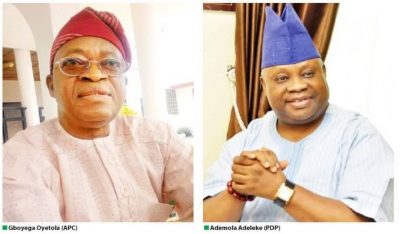 The 3-man tribunal upheld the the petitions filed by Adeleke and the PDP , challenging the victory of the All Progressives Congress ( APC) and Governor Gboyega Oyetola at the September 2018 governorship election. The tribunal had earlier dismissed the objections of the APC and Oyetola.

It said Adeleke’s petition has merit. The tribunal also declared the rerun election as illegal. NAN reports that the PDP and Adeleke, had filed a petition asking the tribunal to declare that he polled the highest lawful votes and should be declared the winner.

Delivering the lead ruling of the three-man tribunal, Chairman Ibrahim Sirajo, held that the objections were misconceived and struck them out. The Tribunal held that the CTC should and must be an exact replica of the EC8A pink copies. The discrepancies must therefore be explained and justified by INEC. In this instance, the tribunal held, INEC failed to explain nor justify the alterations and that they failed to call any witness to justify the alterations.

The tribunal held that the attempt to explain the alterations on the basis of mere corrections of errors is not acceptable and the fact that the said errors were consistently made in the disputed areas means it was a deliberate action taken.

However, Davido has reacted to this good news on his ig by sharing the news with the caption: God no dey sleep!!! MANDATE RETURNED!!! IMOLE TI DE !! OSUN IM ON MY WAY!! 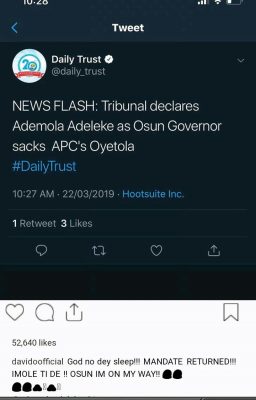