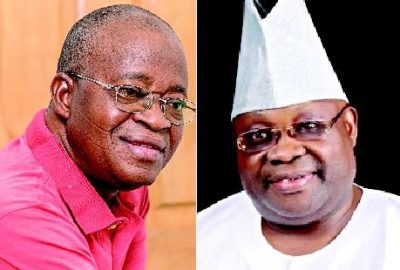 The Independent National Electoral Commission
(INEC) on Monday, March 25, debunked rumours that Adeleke had been issued a certificate of return, Leadership reports.

It was gathered that the election petition tribunal sitting in Abuja, on Friday, March 22, nullified the election of Oyetola and declared Adeleke winner of the 2018 governorship election.

The INEC national commissioner and chairman, information and voter education committee, Festus Okoye, said: “Section 143(1) of the Electoral Act gives a candidate whose election is set aside a period of 21 days from the date of the decision to appeal against such a decision.

It previously reported that the election tribunal judgment on Osun 2018 governorship election ruled in favour of Senator Ademola Adeleke. The three-member bench of the tribunal led by Justice Ibrahim Sirajo, delivered its judgment at the Federal High Court, Apo, Abuja on Friday, March 22.

The petition was filed by the Peoples Democratic Party (PDP ) and its governorship candidate, Adeleke, challenging the victory of Governor Gboyega Oyetola in the gubernatorial polls held in September 2018.

Senator Adeleke and the PDP had put forward a total of 20 prayers including prayer asking to be declared winner of the election and be issued certificate of return by the Independent National Electoral Commission ( INEC).