Kunle Olawunmi, a retired Navy Commodore, has said that some sponsors of terrorist organizations are determined to transform Nigeria into a country in which the Taliban will rule supreme. 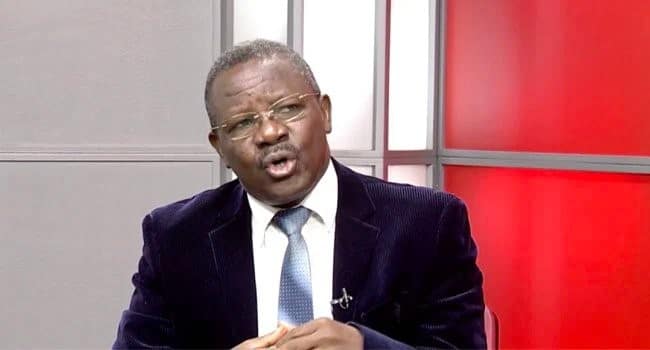 After being successful in convincing the United States government and American intelligence services to allow Major General Muhammadu Buhari (retd.) to become President of Nigeria in May 2015, Olawunmi expressed regret for his actions.

He remembered how several Boko Haram suspects, who were apprehended by the military, made mention of their sponsors, adding that present governors and senators were among those responsible for financing terrorism in Nigeria.

He made his remarks on Wednesday when appearing on a Channels Television program. ‘Sunrise Daily’

While reacting to the recent attack on the Nigerian Defence Academy in Kaduna, the retired Navy Commodore shared his personal experience with Boko Haram terrorists, who he said once named the names of current governors and senators as well as Aso Rock officials as sponsors while being interrogated.

As Olawunmi put it, for reasons that are only known to him, the President has exhibited a reluctance to go after high-profile politicians.

“You remember this Boko Haram issue started in 2012 and I was in the military intelligence at that time. We arrested those people. My organisation actually conducted interrogation and they (suspects) mentioned names.

“Why should a government decide to cause this kind of embarrassment and insecurity that happened yesterday (Tuesday’s attack on NDA)? Terrorist financiers want to turn Nigeria to a Taliban type of country.”

According to him, Buhari has done unparalleled and catastrophic damage to the Nigerian people as a result of his alleged nepotism and his unwillingness to deal firmly with sponsors of Boko Haram within his own government.

Olawunmi maintained that he was one of the high-ranking military commanders from Nigeria’s intelligence circle who met with their American counterparts in December 2014, in the run-up to the country’s presidential election in March of the following year.

It was he and his colleagues from the DSS, National Intelligence Agency and other agencies who persuaded the US government that “the only person who can come and put this country straight is Buhari”

The attack by bloodthirsty bandits on the Kaduna campus of Nigeria’s foremost military university (NDA) on Tuesday, in which two military officers were slain and another was kidnapped, was portrayed by him as an aberration.

“It is an aberration; you don’t attack the Nigerian Defence Academy and get away with it,” he lamented, adding that the NDA, like other military environments in the country, carelessly opens its doors to everyone on Friday for Jumat prayer, thereby giving terrorists the opportunity to profile the military institution.

“But every Friday, the gate of the Defence Headquarters is thrown wide open for everybody to come in and observe Jumat. That is the time the terrorists have to profile our security environment. It has always been the case. I have served the military intelligence for the past 35 years. Our problem is religion and socio-cultural.”