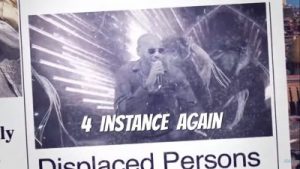 2Baba also known as 2Face Idibia has return with the likely remix for his previous jam titled 4 Instance again which now on the remix features his fellow Nigerian artists, Naija Ninja honcho Sound sultan alongside the veteran Nollywood actor soon to be come a musical artist under the name Lejit. the piece also comes with accompanying music video.

The song “4 Instance again” by Bukwyld Media Network, which is the event organizers of “Buckwyld & Breathless”. and sees 2Baba, Sound sultan and Alexx ekubo, Lejit have raising their voices in new track,to speak into the state of the nation.

Watch The Mp4 Video below;