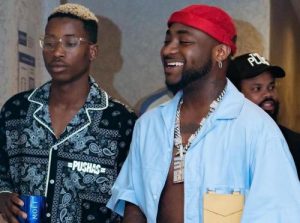 It’s no longer news that Lil frosh is guilty of allegedly battered his girlfriend whose swollen eye pictures is now viral.

In a painful twist of event, Lil Frosh who was alleged to have subjected his girlfriend to domestic violence has been shown the door by the DMW boss.

It will be recalled that a media influencer took to social media to drag Lil frosh for beating up his sister who is a video vixen on repeated occasions.

according to this brand influencer, he claimed, her sister has lost many jobs due to the frequent beating Lil frosh inflicts on her.

The model found the courage to speak up after her brother has put it out on social media, she revealed that she had been dating Lil frosh for ten months. gift Camile said, he has been abusing her physically and emotionally for a long time, she said she stayed put because she thought, he would change. 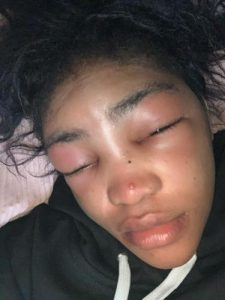 Well, you cannot eat your cake and have it, as the DMW has taken their decision regarding the unfortunate avoidable situation.

The DMW in a press release has taken to social media to frown at the development and therefore terminated the appointment of Mr. Sanni Goriola Wasiu popularly known as Lil Frosh.

See the official press release confirming the termination of his contract below! 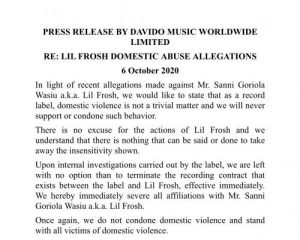 I am Young Enterprenuer and a Music blogger; Serving you latest + New songs for Free And Fast Download in Mp3 Audio and latest album, Music Videos in Mp4 Files.