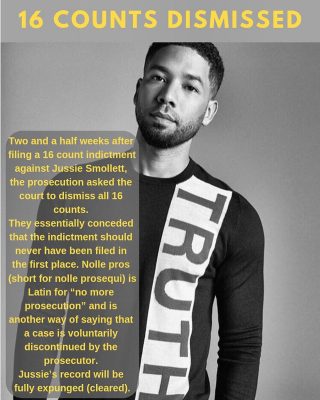 There have been rumors about how Jussie Smollett fellow Empire cast members have reacted to his court battle.

Taraji P.Henson previously called the atmosphere on set “great” through the off-screen drama, and now that Smollett is attempting to rebuild his career—and his overall life— his Empire family have come forward to show their support.

Empire actor Jussie Smollett Charged For staging An attack on Himself

“I’m happy that the truth has finally been set free , because I knew it all along,” she said. We’re all happy for him, and thank God the truth prevailed.

Those little clickbait (reports) weren’t enough to deter me from his immaculate track record. I know the type of activism this young man does in his community, I know that he’s a giver – he’s not an attention-seeker.”

She added, “When I know someone, there’s nothing you can say to make me flip on them, and that’s what we miss in this world,” she says. “We need people that stand by us. Whatever happened to that? Why are we so easy to believe strangers over people we know?”.