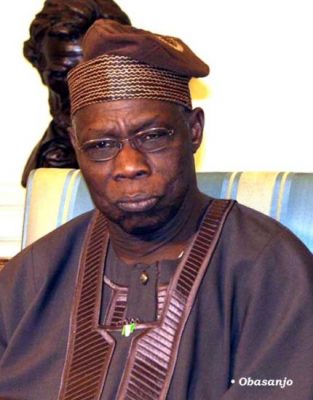 It was reported On Monday that he gathered a team of lawyers at the Court of Appeal, who are currently working on the processes of filing the petition. Mr Obasanjo , however, said speaking about the election would be ”subjudice.”

The former president spoke on Tuesday at the Shehu Musa Yar’adua Centre Abuja, at the launch of a book written by Abdullahi Shehu, titled ”Election in Nigeria: The Long Road To Democracy.” The event attracted the presence of dignitaries, including a former Head of State, Yakubu Gowon; human right activist, Femi Falana; a former deputy president of the Senate, Ibrahim Mantu; Chido Onumah, author of ‘We Are All Biafrans”, among many others. ”I will not dabble into the details of what I call current aspect of Prof Shehu’s book because since the emphasis was on the national election, particularly the presidential election, and the presidential election is now taken to court,” Mr Obasanjo said.

”I think talking about it would become subjudicive, because it has been taken to court,” he added. Mr Obasanjo , also, spoke on Mr Shehu’s book. ”The book discusses the election and electoral processes in Nigeria including why there must be a free fair transparent and credible election as predictive autumn of the country.

”It reviews the main factors that led to the defeat of the PDP in 2015, and how the APC mismanaged the victory. The main thrust of the book is a comparative analysis of the APC Next Level and the PDP ” Let’s Get Nigeria Working Again”, he added.

The measure of a democratic election is that it is transparent fair, credible and acceptable ”The problem is who determines these outcomes in the election? And that is where the concerns about a sustainable democracy arises and sustainable democracy, if an election is fundamental and basic to democracy and good governance.” The former president further reviewed the part highlighted in the book, as ”Election Integrity.”

He described an election without integrity as a ”farce” ”Then we go to the other part and very important part in which Prof Shehu highlighted very much in this book, and that is election integrity. Without integrity, any election is a farce. ”In this regard, an election can futher enhance democracy, security, human right and freedom,” he said.