Billie Eilish – Wish You Were Gay 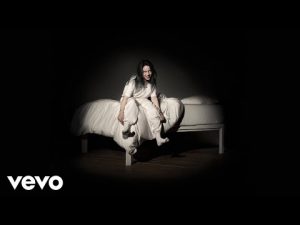 The singer, who will soon release ‘When We All Fall Asleep, Where Do We Go?’, told Zane Lowe:

“The album is basically what happens when you fall asleep. For me, in every song in the album there’s sleep paralysis. There’s night terrors, nightmares, lucid dreams.”

Billie Eilish debut single, “Ocean Eyes”, went viral. after her debut EP Don’t Smile at Me was released in August 2017. The EP went on to become certified Gold by the RIAA.

Eilish went on to describe how she had suffered with night terrors herself: “I’ve always had really, really bad night terrors. I’ve had sleep paralysis five times. All my dreams are lucid so I control them.

“I know that I’m dreaming what I’m dreaming, so I don’t even know. Sometimes I’ll have dreams where the thing that was in my dream will happen the next day. It’s so weird. Its’ so weird.”

About the new single she tweeted:

Billie's new single "wish you were gay" is out now on @Spotify https://t.co/JpTJ572OE6

You can as well pre-order When We All Fall Asleep, Where Do We Go HERE.

Listen to Wish You Were Gay by Billie Eilish below and share!