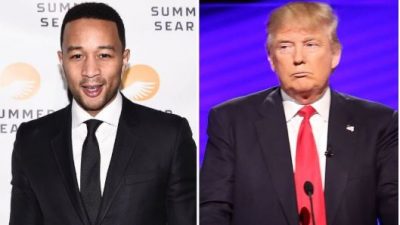 The American rapper and “All Of You” hitmaker John Legend who recently got to have an intimate dinner with the former president of the United States, Barack Obama has called the current president, Donald Trump a ‘complete moron’ when compared to the ‘intelligent’ number 44.

Legend expressed the opinion that Trump is being a “complete moron and a**hole” during a February 26 appearance on “The Daily Show”. Legend detailed how he recently had the privilege of dining with Obama and that the comparison between him and Trump is scary and striking. When asked by the show’s host, Trevor Noah what it’s like to have an intimate dinner and discussion with Obama then turn on the TV and listen to Trump speak, John said;

“Honestly it’s a very jarring the juxtaposition. Just listening to Obama talk and listening to Trump talk and the level of nuance that Obama is capable of and his worldliness and intelligence about life and his good character…it’s actually really jarring. I’m not trying to be funny. We have a complete moron and a**hole in the White House right now. He’s not a good human being. And so when you’re with someone who is a really good human being, it’s a very jarring juxtaposition.”

“It was the coolest President’s Day of my life. That was pretty cool. I was with him and Steph Curry, who is like the greatest shooter of all time…you know it was good times. Steph’s wife is part owner of a restaurant there called International Smoke in San Francisco and they were hosting us because the president was doing his My Brother’s Keeper alliance gathering there in Oakland. And so the night before the gathering we were going to be on a panel together and talk to young people and he hosted us for dinner. It was pretty cool.”

Read President Muhammadu Buhari statement as He Got re-elected