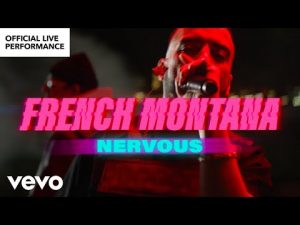 French Montana always reps the set. So it was only right for his latest release, “Nervous,” that French took things to the Bronx for Vevo’s Official Live Performance series. While there, the Bad Boy rapper ditched to the jewels to chronicle the politics of the block, from betrayal to paranoia. “Get the f-ck around from if you nervous,” he sneers over Harry Fraud’s sinister production.

The track is one of the first offerings from French’s forthcoming third album, due later this year. Keep cool and press play, The video is directed by Micah Bickham, French Montana is a Moroccan-American rapper, singer and songwriter. Born and raised in Morocco, he immigrated to the United States with his family when he was 13.

Enjoy Nervous Video by French Montana below and share!