Ronaldo Voices Out Ahead Of Juventus Match With Atletico Madrid 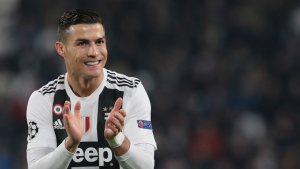 The Star player Cr7, Christiano Ronaldo has speaks about the chances of Juventus winning the game against Atletico Madrid.

The game which will be played at the Allianz Stadium Tuesday night will see Juventus working to erase the 2-0 loss they suffered away at Madrid.

“We didn’t expect to lose the first leg 2-0, but anything can happen, and we want to give a great response in our home, in front of our fans,” Ronaldo spoke ahead of the game.

“These are the great nights, the fantastic ones: the Champions League nights,” he continued.

“The team is confident of playing a great game and I am too. To the fans I say: think positive, let’s believe.“Get ready to come back!” Ronaldo was signed by the seven-time reigning Italian champions last summer from Real Madrid for 100 million euros to end their Champions League heartbreaks which they’ve suffered at his hand.

A stunning overhead kick from the Portuguese in the quarterfinals in Turin last April dumped Juventus out of the tournament once again.