I Had No plan to remove INEC Chairman Yakubu – Buhari 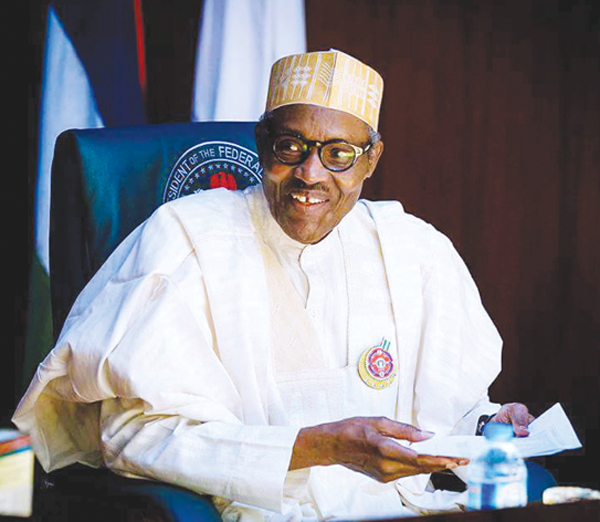 There is no plan to remove Independent National Electoral Commission (INEC) Chairman Mahmood Yakubu over the abrupt postponement of the general elections, the Presidency said yesterday.

A leading politician has alleged that President Muhammadu Buhari was planning to give Yakubu the push over last Saturday’s postponement of the elections.
“It is not true,” a Presidency source said.
The denial came amid claims that Prof. Yakubu has taken charge of logistics for the elections.
Besides, The Nation learnt, the electoral agency is to release details of the state-by-state collection of Permanent Voters’ Cards (PVCs).

The Senior Special Assistant to the President on Media and Publicity, Mallam Garba Shehu, debunked the reports that Yakubu was to be removed.
Shehu said: “Those reports are utterly baseless and false. There is nothing like that.
“Whoever is saying the President is removing INEC chairman is just displaying his illiteracy. Let him go and read the constitution.

“You need a resolution by two-thirds majority of the Senate for any such action.”
The clarification by the Presidency came against the backdrop of the agitation by National Chairman of the Peoples Democratic Party(PDP), Prince Uche Secondus, and the alarm raised by the amorphous Coalition of United Political Parties( CUPP) that President Muhammadu Buhari was plotting to remove the INEC chairman.”
Another government source, who spoke in confidence, said: “What PDP National Chairman Secondus wanted was more of electoral anarchy, which this Buhari administration will not oblige him. Resignation or removal of INEC chairman is never contemplated by the President.

“Buhari’s administration will not change the rule in the middle of the game. Asking INEC chairman to quit will cause rumpus within INEC management , disrupt all preparations for the poll and create unrest nationwide.
“The opposition has a hidden agenda, which this government will not buy into. We will also not play into their hands.The INEC chairman will remain in charge of the electoral agency.”
Secondus said the “shoddy” arrangement for the elections by INEC was “a deliberate agenda” of President Buhari to cling on to power even when it’s obvious to him that Nigerians want him out. secondus called on Yakubu to resign immediately.

The PDP leader warned that the party will not accept anything short of a well organised electoral process devoid of manipulation, harassment and intimidation of voters and the opposition, particularly members of the PDP.
Having failed in all their nefarious options to enable them cling on to power, the APC and the INEC came up with the idea of shifting elections, an action that is dangerous to our democracy and unacceptable, Secondus said.
Sections 157 and 158 of the 1999 Constitution prescribe conditions for the removal of the INEC chairman and National Commissioners as well as board members of nine other agencies.

Section 157 says: “(1) Subject to the provisions of subsection (3) of this section, a person holding any of the offices to which this section applies may only be removed from that office by the President acting on an address supported by two-thirds majority of the Senate praying that he be so removed for inability to discharge the functions of the office (whether arising from infirmity of mind or body or any other cause) or for misconduct.

He said from Monday, he will shift base to the airport to take stock and monitor the airlift of sensitive materials to all the states,” The source said, adding:
“He has vowed not to leave any stone unturned. The latest plan is to ensure that all the 36 states and the FCT are ready for the first phase of the elections on or before Thursday. We want everything set in 8,809 Registration Areas, Wards and in 119, 973 Polling Units and 57,023 Voting Points nationwide so that accreditation can take off simultaneously on Saturday.

“If the Central Bank of Nigeria or the Nigerian Air Force cannot cope with the airlift of materials, INEC has floated a Plan B to engage chartered aircraft. No stone will be left unturned.”
Meanwhile, the electoral commission may release the statistics on collection of Permanent Voters’ Cards on state by state basis during the week.

A National Commissioner said: “We will be as transparent as possible. During the week, we will release the statistics of PVCs’ collection per state. Also, each Resident Electoral Commissioner ( REC) will be mandated to make the breakdown of the PVCs available to the public on local government basis.
“While it is true that over 84million eligible voters registered, not all of them collected their PVCs. We want to give account of what was collected before the poll.”
The CUPP on Saturday raised the alarm over an alleged plan by the President to suspend the INEC chair.

It alleged that President Buhari was planning to replace Yakubu with Amina Zakari as Acting Chairman under the guise of INEC’s inability to conduct the presidential and National Assembly elections.

According to CUPP, Buhari wanted to sack the INEC chair for refusing to conduct staggered election.
In a statement by its National spokesperson, Ikenga Ugochinyere, the CUPP alleged that the Buhari-led APC sabotaged INEC distribution of materials and turned back to condemn the electoral umpire.

The coalition warned that the move to sack INEC chairman will throw Nigeria into full electoral and constitutional crisis.
The statement reads: “The Coalition of United Political Parties is alerting the world of plan and decision by President Muhammadu Buhari to announce the suspension of the chairman of the Independent National Electoral Commission, Mahmood Yakubu, from office.
“The President has also pencilled down Amina Zakari for appointment as the Acting Chairman citing her experience as the oldest and most experienced National Commissioner of the Commission.

“The President is planning to use the excuse of inability to hold election today (Saturday) as a reason for the imminent suspension.
“Feigning ignorance of the real reasons behind the shift, the President in his earlier statement did not have just a word for the shameful and despicable actions of security forces and the central Bank staff who in obedience to Presidency directives deliberately sabotaged the distribution of sensitive materials in selected states.

“We are aware that his hurried return to Abuja today (Saturday) from his home state, Katsina is to sack the INEC boss. But this should be resisted by all well-meaning Nigerians and the international community.
“The sin of the INEC chairman is that he refused to conduct staggered elections that will allow the President and his men to manipulate the process.

“The Presidency had mounted pressure on the Commission to conduct election today (Saturday) in states where there were no issues and postpone only the states with materials distribution issues. The INEC Chairman insisted on conducting the election at the same time, hence warranting the postponement of the entire election.
“We hereby warn President Buhari that the position of the INEC chairman is independent, hence, he cannot be removed from office via suspension.

The 1999 Constitution in Section 157(1) states that the Chairman and members of the Commission may only be removed by the President acting on an address supported by two-thirds majority of the Senate that the person be removed for inability to discharge the functions of the office (whether arising from infirmity of mind or body or any other cause) or for misconduct.”